The Trendall Lecture was made possible through a bequest made by Professor A.D. (Dale) Trendall AC CMG FAHA (1909–95), a Foundation Fellow of the Academy. He envisaged the lecture series as ‘an annual lecture or lectures by a scholar on some theme associated with classical studies’.

Distinguished scholarship in the classics

The Trendall speaker alternates between an Australian and an international scholar who is selected, where possible, on the basis of their scholarly ties to Professor Trendall or to his research interests.

Dale Trendall, of course, in a lifetime of scholarly endeavour demonstrated only too brilliantly the historical, social, and artistic significance of Greek pottery.Michael Osborne, Trendall Lecture, 1997 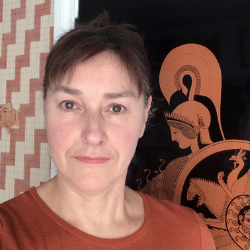 Marian has long been intrigued by Greek vase painting and admired ancient artists for their skill and invention within a tight constraints and continues to draw on their work for inspiration. The creative process is not linear, it involves sideways leaps. In this lecture, she talked about the weaving of multiple ideas in her work and the research and thought processes that sit behind the images. The central focus was on the making and reception of her New Zealand colonial series: The Odyssey of Captain Cook, The Labours of Herakles and Titokowaru’s Dilemma.

The lecture occurred at the Australasian Society for Classical Studies conference at the University of Otago, Dunedin, New Zealand on Tuesday 28 January, 2020. An edited version of the lecture will appear on our website in due course.