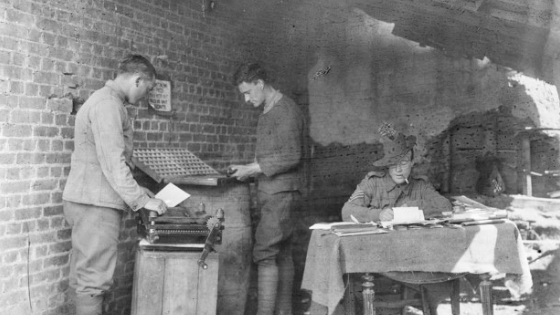 To mark this year’s Remembrance Day, we invite you to explore articles and research from three of our Fellows examining how soldiers harnessed the power of writing, language and humour to make sense of their experience of the Great War. Using sources such as soldier’s diaries, trench journals, and wartime magazines, the research on display here moves beyond the panoramic view of the War and its economic, social, and political consequences, to a more detailed consideration of the personal and intimate experiences of soldiers.

Dr Peter Cochrane FAHA’s article ‘Diamonds of the Dustheap: Diaries from the First World War’ first appeared in the 6th edition of the Academy’s flagship journal Humanities Australia. Drawing on the vast collection of soldier’s diaries housed in the Mitchell Library at the State Library of NSW, Cochrane argues that the pre-eminent quality of these texts is their ‘unpretentious authenticity and immediacy, a realism matched by no other literary form in the records of wartime experience.’ This, he says, gives us access to the inside perspective, plain and unvarnished, of those caught in the chaos of daily life in the trenches.

A fitting companion piece, the article ‘Comedy in the trenches’ appeared in the University of Melbourne’s online magazine The Pursuit in late 2017 and features the research of Professor Véronique Duché Chevalier dans l’Ordre des Palmes Académiques FAHA. Duché shows how Australian soldiers found relief from the relentlessness of the First World War by using the language of the German enemy to entertain each other in journals written whilst stuck in the trenches. As she argues, twisting words in the German vernacular to create ‘slanguage’ helped soldiers regain a sense of community and provided relief and distance from the enemy.

Finally, Professor Emeritus Colin Nettelbeck Chevalier de la Legion d’Honneur; Officier des Palmes Académiques FAHA looks at how the Dernière Heure, a stand-alone magazine or booklet of some 60 pages produced by members of the Australian Imperial Force (AIF) awaiting repatriation after the Armistice, brought a sobering assessment of the war’s costs; and, more positively, an awareness that a deepening friendship had been born between Australia and France.

Colin Nettelbeck, ‘Not Just a Nostalgic Farewell: The “Derniere Heure” as a Landmark Document in Franco-Australian Friendship’, The French Australian Review: World War 1 Special Issue, No. 59, 2015-16, 55-78.

This is the second installment of ‘Re-Encountering the Archive’. This initiative, in which we share selected research and writing from our Fellowship on a range of issues, is designed to showcase past scholarship that still resonates powerfully with contemporary debates and challenges facing the nation.

See the first in the series: Gallipoli: Transnational perspectives from archaeology, literature and film (April 2018).