The Australian Academy of the Humanities is delighted to announce that Dr Raihan Ismail of the Australian National University and Dr Ana Tanasoca of the University of Canberra are the joint recipients of the 2018 Max Crawford Medal, Australia’s most prestigious award for early-career researchers in the humanities.

The Medal was established through a bequest made to the Academy by the late Professor R.M Crawford OBE FAHA, and is awarded to an Australia-based, early-career scholar whose research and publications make an exceptional contribution to the understanding of the humanities by the general public. This is the third time in its history that the Medal has been awarded to two outstanding early-career researchers in the same year.

This year’s recipients are both scholars whose cross-disciplinary approach to their research has resulted in work of distinct originality and excellence, and whose projects are notable for their public accessibility and national significance. 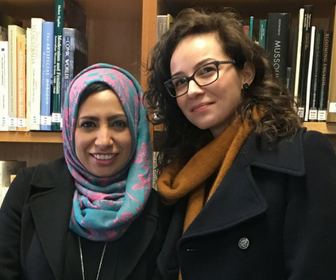 Dr Ismail is currently a lecturer at the Centre for Arab and Islamic Studies at the Australian National University. Her research interests include Islamic theology and Arab culture, Sunni-Shia relations, women in Islam and Middle East politics. She is the author of Saudi Clerics and Shia Islam published by Oxford University Press in 2016. Through her ability to translate complex theological and social issues for a general audience she has connected her research to public debates on Islam and Muslim societies, appearing on the ABC’s Q&A and in other media outlets.

Dr Tanasoca is a postdoctoral research fellow at the Centre for Deliberative Democracy & Global Governance at the University of Canberra. She has broad interests across moral philosophy, ethics, and analytic normative political theory, in topics ranging from enfranchisement to climate change. Her book The Ethics of Multiple Citizenship, to be published by Cambridge University Press later this year, is remarkably timely. Dr Tanasoca is engaging with current debates about the ethical and political problems that accompany dual citizenship and questions of multiple citizenship.

Upon hearing of their award, both recipients spoke of its significance to their individual research fields and to their development as early-career researchers.  “I am deeply honoured that the Fellows of the Australian Academy of the Humanities have recognised my work through the Max Crawford Medal” Dr Ismail remarked. “The award will enhance my profile both in Australia and internationally, and help me to engage in academic and public policy debate in my fields of Middle Eastern politics and Islamic studies.”

Dr Tanasoca noted that “It is wonderful to have an institution of the stature of the Academy recognise the academic quality and public value of my research on the moral legitimacy of multiple citizenship. To be awarded the Max Crawford Medal is both a great personal honour and an immense career boost for an early-career researcher.”

For over a quarter of a century, the Max Crawford Medal has been awarded biennially to outstanding humanities researchers at the earlier stages of their careers, working across a range of disciplines and institutions. The Max Crawford Medal is awarded following a rigorous process of assessment. For the 2018 round, the assessment process began in April this year. A list of previous recipients of the award is available on our website.

In order to further recognise and foster the outstanding work being undertaken by the future generation of humanities scholars, the Academy will award the Max Crawford Medal on an annual basis starting in 2019 to coincide with our 50th Anniversary celebrations. Details of the next round of nominations will be posted on our website in February 2019.

The Max Crawford Medal will be formally presented to the recipients in November as part of the Academy’s annual program of events in Sydney.