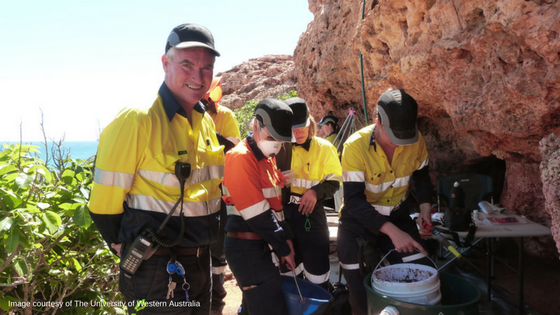 Earliest Australian’s lived on the coast 50,000 years ago

A team of international archaeologists, led by Academy Fellows Professor Peter Veth FAHA and supported by coastal archaeology specialist Professor Sean Ulm FAHA, have confirmed human occupation of Australia to be at least 50,000 years ago.

A remote cave on Barrow Island, located off the Pilbara coast in Australia’s North West, is the site of this significant international humanities-led discovery. The research shows the cave to be Australia’s earliest coastal archaeological site, offering great insights into the life of early Australians.

“The cave was used predominately as a hunting shelter between about 50,000 and 30,000 years ago before becoming a residential base for family groups after 10,000 years ago. It was abandoned by about 7,000 years ago when rising sea levels finally cut the island off from the mainland” said Professor Veth. While the discovery sets the age of occupation back to a more conservative limit of between 51,100 and 46,200 years ago, further research may reveal even older coastal dates.

Professor Peter Veth FAHA from The University of Western Australia said “The Barrow Island Project deliberately targeted continental islands of the Australian continent. Sites recorded on these islands have provided unique windows into past Aboriginal people and environments exploiting the coastlines and plains of a now drowned landscape; the originally settled landscapes of Greater Australia”.

Coastal archaeology specialist and Academy Fellow Professor Sean Ulm FAHA of James Cook University worked on refining the radiocarbon dating of the site. “We know that the earliest Australians were seafarers as they came to Australia by boat. But until now we have known very little about these first coastal peoples. This new discovery, with its extraordinary preservation of archaeological remains, gives us a glimpse of the lives of the people who lived on the coast in the earliest periods of colonisation of the continent and how they adapted to a new and ever changing arid landscape” Professor Ulm said.

Professor Veth said he was delighted that a 25 year campaign of surveying the islands of the North West Shelf had resulted in the earliest dates for coastal occupation of Australia and indeed some of the earliest for Aboriginal occupation overall.

“During National Reconciliation Week it is heartening to think that the very deep history of Indigenous Australia is being celebrated and that the extraordinary achievements of the First Australians are becoming central to national identity” he said.

The Academy congratulates Professors Peter Veth and Sean Ulm in their leadership in this significant discovery, one that will certainly shape further understanding of Aboriginal Australians both past and present.