The Big Picture:
Public Expenditure on Artistic, Cultural and Creative Activity in Australia 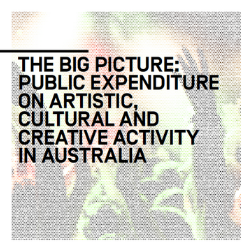 The report looks at more than a decade of expenditure on arts and culture by the three tiers of government in Australia (2007-08 to 2017-18).  Current and credible data sources have been utilised and it is the most comprehensive study of its type. It identifies some basic international comparisons and, by synthesising available data, enables meaningful comparisons to be made now and into the future between different years, different levels of government and different areas of expenditure. One of our hopes is that people will realise the value in capturing, analysing and disseminating relevant data to ensure an even clearer picture of the funding environment and return on investment in all its forms.

As the first output of an ambitious research agenda, the report provides new insights and also raises many questions. Future reports are focused on impacts and benefits; changing production, consumption and distribution dynamics; and global shifts in cultural policy.

Finding 1: Australian public expenditure on arts and culture reached its highest point in 2017–18, while fluctuating during the previous decade (using adjusted figures). Cultural expenditure is not matching population growth. Per capita public expenditure on culture has dropped by 4.9 per cent over the decade 2007–08 to 2017–18, and expenditure as a percentage of GDP remains below the OECD average.

Opportunity 1: Introduce greater strategic collaboration between all tiers of government with clear recognition of the increasingly significant contribution of local governments to cultural funding.

Opportunity 2: Identify steps to maintain a commitment to meeting the long-term per capita average of the last decade as a minimum.

Opportunity 3: Consider measures and incentives needed to boost cultural expenditure to average OECD country levels within the next decade.

Opportunity 6: Given that significant capital expenditure on cultural assets may come through government programs without a specific cultural focus, identify opportunities to ensure investment decisions are made using relevant cultural expertise and that these opportunities are made more visible across the sector.

This report has been prepared by A New Approach (ANA). The data collation and preliminary analysis underpinning the report was provided by Tracker Development.

The opinions in this report do not necessarily represent the views of ANA’s funding partners, or the individual members involved in the governance or advisory committees.

Please complete our briefing request form to have a member of the A New Approach team present on our research agenda and Insight Report One.

You can find out more about by reading our Frequently Asked Questions. You can keep up to date by subscribing to our e-newsletter.

ANA can be contacted directly via NewApproach@humanities.org.au